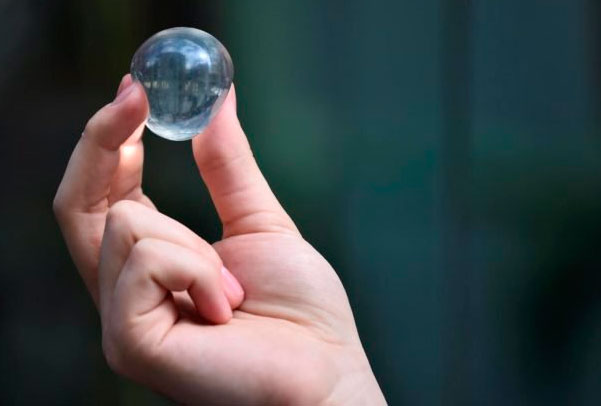 It is time to eat water instead of drinking it. Yes Yes. And end with thousands of plastic bottles that only serve to pollute our oceans and our planet. It’s time to drink water bubbles, explode them in our mouth and enjoy the taste of sustainable packaging: Ooho!

Skipping Rocks Lab is an innovative sustainable packaging company based in London. They are pioneers in the use of natural materials extracted from plants and seaweed to create containers with low environmental impact.

His first product, Ooho !, has been born to revolutionize the water market now. It is a water bubble created under the inspiration of molecular cuisine. The company has used a technique known as spherification to introduce water into a sphere. Brown seaweed extract and calcium chloride form a gel-like structure that acts as an elastic membrane and retains water inside. To protect it, the company has used a second membrane that functions as a hygienic container. We just have to remove it and the remaining sphere is 100% edible. We can pop it in our mouth or bite carefully to drink the liquid it contains. The outer membrane is not edible, but calm, it will biodegrade after four to six weeks.

Best of all, this flexible spherical container can also be used for other liquids, including soft drinks, spirits and cosmetics, and is made of a patented material, care, cheaper than plastic.

In this way, the start-up offers alternatives without waste to bottles, glasses, plates or any other plastic container. Thus, it stops the arrival in the ocean of 1 billion plastic bottles that would arrive every year and ends with the emission of 300 million kilograms of CO2. What do you think about the invention?

Skipping Rocks Lab is part of the Climate KIC start-up acceleration program, founded by the European Institute of Innovation and Technology (EIT) and the Imperial College scientific team.

Skipping Rocks Lab has already received two awards, such as the 2014 Lexus Design Award, the 2014 World Technology Award (environment) held in partnership with Fortune and TIME, the 2015 SEA Award and the 2016 UK Energy Globe Award. A We think they are few. We can give the best prize, eating their water and making this idea an example to follow. As? Eat water, my friend!